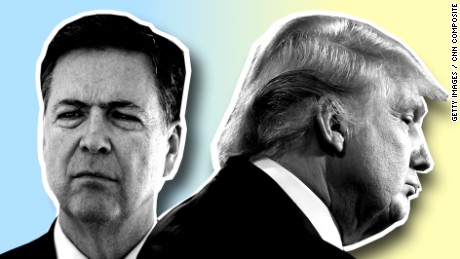 The White House just can't get its story straight about why President Trump decided to fire FBI Director James Comey. When the move was initially announced -- just before 6 p.m. ET on Tuesday night -- the White House pointed to a memo written by deputy Attorney General Rod Rosenstein that made the case that Comey had lost support of the organization with his handling of the investigation into the private email server maintained by Hillary Clinton. "I cannot defend the Director's handling of the conclusion of the investigation of Secretary Clinton's emails, and I do not understand his refusal to accept the nearly universal judgment that he was mistaken," wrote Rosenstein. "Almost everyone agrees that the Director made serious mistakes; it is one of the few issues that unites people of diverse perspectives."

From the jump, it seemed odd that Comey's actions in and around the Clinton email server investigation were the impetus for this move. After all, while Trump had been openly critical of the Director's decision not to bring charges against Clinton, he had also heaped praise on Comey when the investigation was re-opened in late October due to the discovery of another trove of emails.

"It took guts for director Comey to make the move that he made," Trump said of Comey's decision at an Oct. 31 rally. "It took a lot of guts." As Tuesday turned to Wednesday, the story coming out of the White House began to change. Trump himself said after a photo op with, wait for it, Henry Kissinger, that Comey had been let go "because he wasn't doing a good job."

Later, deputy press secretary Sarah Huckabee Sanders said that the real reason for Comey's dismissal was the "atrocities" he had committed against the chain of command by openly acknowledging in Congressional testimony last week that he had not told the attorney general -- Loretta Lynch at the time -- what he would say on July 5 when he announced his findings in the Clinton case.

So, which is it? And did Trump, who huddled with Rosenstein on Monday, ask the deputy attorney general to write a memo to justify the firing? Or did Rosenstein do it of his own accord without Trump's knowledge? (There are conflicting reports on that coming out of the White House.) And did Trump turn on Comey relatively recently -- maybe starting with his testimony to Congress on May 3 -- or had he been considering getting rid of Comey from the first day of his presidency as Huckabee Sanders said? (There are conflicting reports on that too.)

What the ever-changing stories trying to explain why Trump did what he did suggest is that no one either knows or wants to talk about the real reason that Trump moved on Comey.

And that reason appears to be, according to scads of reporting in CNN and elsewhere, that Trump was angry at Comey -- for not being enough of a company man, for seemingly undercutting his 2016 victory, for dismissing the ideas that President Obama had surveilled him in the campaign, for continuing to push on the Russia investigation when Trump wanted him to spend more time on the number of leaks coming out of the intelligence agencies. This line, from a piece by CNN's Jeff Zeleny and John King, is particularly revealing: "Several people familiar with the decision say the President grew increasingly frustrated at Comey after his congressional hearing last Wednesday when he testified that he was 'mildly nauseous' over the idea that he helped sway the election."

Trump, we know, spends a lot of time talking about and thinking about his 2016 election victory. And nothing makes him angrier than when he believes someone is trying to either lessen or take credit for what he accomplished in that race. That, in Trump's mind, is the one unforgivable sin. The firing of an FBI director is always going to be a big deal that merits explanation. That the White House has offered so many -- and they all appear to be either contradictory, half true or misinformed -- makes this an even bigger deal.

Why? Because, as of right now, it appears that the president of the United States fired the director of the FBI because he was angry at him for not doing exactly what Trump wanted him to do. And that should be very concerning. To everyone.